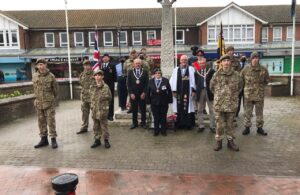 The socially-distanced civic service was conducted at the Hailsham War Memorial, at which thanks were given for the contribution made by members of the Armed Forces, past and in the present, in serving the country.

Town Mayor Councillor Paul Holbrook, who attended the service alongside fellow Council members said: “Armed Forces Day aims to raise public awareness of the contribution made to our country by those who serve and have served in Her Majesty’s Armed Forces. Furthermore, it gives us all an opportunity to show our respect, gratitude and support for the men and women who make up the Armed Forces community.”

“Local councillors are always honoured to, alongside members of the public, commemorate the heroics of so many men and women who make up the Armed Forces community including veterans, serving troops and their families and new recruits. It’s wonderful that people turn out each year to celebrate Armed Forces Week and show their support.”

“The past year especially has brought their contribution into much sharper focus and long with it, a deeper appreciation of all work undertaken by service men and women, playing a vital role in supporting the community in the fight against Covid-19.”

Bookings from residents and local community groups are being taken for the hire of the James West Community Centre, which is located off Brunel Drive in…