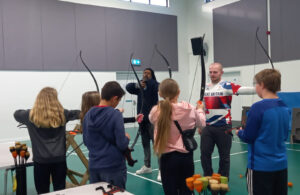 An Olympic athlete and British Number One in archery visited Hailsham Youth Service’s Monday Youth Hub yesterday evening [11 April] to talk to and inspire young people – and teach them the art of archery.

Recurve archer Patrick Huston, who is the first ever archer to win the Great Britain National Series Recurve title three times in a row in the same year (2017), paid a visit to young people in attendance at the James West Community Centre to give a talk about being an elite athlete and an Olympian, help inspire them to take up sporting activity and teach them the basic skills associated with archery.

From Belfast and having taken up archery at the age of eight, Huston excelled from an early age under the guidance of British longbow champion Audrey Needham, taking three youth world championship titles in his teenage years.
He captured three world championship titles under the youth level, and eventually competed as a member of the archery squad of Team GB at the 2016 Summer Olympics in Rio, losing the second-round match to the eventual champion Ku Bon-chan of South Korea in the last 32.
Huston currently trains full-time under senior national coach Richard Priestman for Archery UK, while remaining a loyal founding member of the East Belfast Archery Club since the age of 15.

The visit to the Monday Youth Hub by Patrick Huston was part of the No Knives project, which supports young people to make more positive choices when it comes to youth violence, knife crime and the carrying of weapons.

“It’s fantastic to have an incredible ambassador for UK sport like Patrick pay us a visit and share first-hand experience with Hailsham’s young people about what can be achieved in life with hard work, persistence and dedication,” said Deputy Youth Service Manager Simeon Brown.

“We’re extremely grateful to Patrick and the No Knives project for their important work with young people, and for helping to make this visit happen.”

“Patrick spoke to the young people about his incredible archery career and even taught them first-hand the ins and outs of archery – and how his path to becoming an Olympian and British Number One in his field progressed from such an early age. We were all very inspired by his visit!”

Activities for Young People a Priority in 2018

Hailsham Town Council’s youth services continue to benefit young people school years 7 to 12, providing them with access to a wide range of opportunities and…

Year 6s Invited to Attend After School Club in Hailsham

Primary school children in Year 6 (ages 10 and 11) are now invited to attend after-school club and afternoon sessions, which take place at the Square…

Hailsham Youth Service, which provides activities, support services and opportunities for young people in the local area, has received £300 from a Waitrose grant, part of…

Workers from the Town Council’s youth service team continue to maintain a presence in Hailsham as lockdown easing continues. In response to the current COVID-19 crisis…