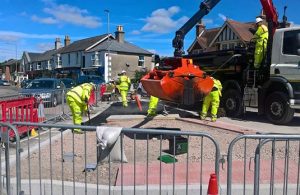 Work on a major project to improve transport and access in Hailsham town centre is entering its final stages and, whilst the main part of the program has been completed, work on the reconstruction of the junction between Marshfoot Lane and Vicarage Road is due to commence soon.

These works were originally planned to take place over a five-day period from 10th July. However, to keep Vicarage Lane and Vicarage Road open to one-way traffic and to avoid any traffic delays on the High Street and North Street due to road closures, East Sussex Highways’ contractors have re-programmed the works.

This means that while the works still commenced on 10th July, they will now take one week longer to complete. However, a one-way traffic flow will be maintained on Vicarage Lane and Vicarage road and the junction between Marshfoot Lane and Vicarage Road will need to be closed during this time.

Anyone wishing to access the leisure centre, Waitrose, District Council offices or car parks on Vicarage Lane during this two-week period will be able to do so via the north end of Vicarage Lane and can exit by turning towards Vicarage Road and heading down towards the junction between Market Street and George Street.

Apart from the planned night-time closure on 10th August, the one-way traffic flow on Vicarage Lane and Vicarage Road will be kept in place for the remaining period of the town centre redevelopment works which are still on track to be completed by 11th August.

“Despite the disruption caused during the course of these town centre road improvements, the visual quality can already be seen and pedestrians are benefiting from wider pavements and safer crossing points,” said Town Mayor Councillor Nigel Coltman.

“Traffic and parking control is still an issue however, and the Town Council is discussing possible changes with other authorities. Furthermore, we are working with Environment Hailsham to install a number of flower planters in the town centre as a positive visual enhancement and a discouragement to drivers parking on the pavement.”

The Town Council has agreed to support plans by Wealden District Council and other service providers for long-term infrastructure improvements to support future housing developments, subject…

Information on the forthcoming transport improvement scheme being developed for the town centre by East Sussex County Council in partnership with Wealden District Council, Hailsham Town…