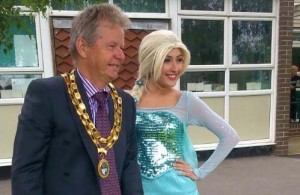 An afternoon of fun was had by all when Hawkes Farm Primary School opened its gates to welcome the wider community in. The school grounds played host to its annual Summer Fair, held last Saturday [13 June], which was organised by the school’s parent and teachers’ association.

Children tried their luck at coconut shy, lucky dip, pick-a-lolly and various other sideshow games and there was a myriad of fun activities including a bouncy castle, judo demonstrations, pony rides, inflatable assault course and a football tournament.

There was a wide range of attractions from local community organisations including displays from East Sussex Fire & Rescue, Eastbourne Rabbit Rescue and Hailsham Bonfire Society, as well as entertaining performances from the Hunters Moon Morris Dancers and Allan Bailey Band.

The event was kindly sponsored this year by Simon Marden Estate Agents.

Grateful to the organisers for putting on such an enjoyable event, Councillor Coltman said,

“I was delighted to be invited to open the Summer Fete and present prizes to the various deserving competition winners on the day. The weather was kind to us, which helped everyone get into the swing of the event.

The organisation of the fete was a great effort from everyone involved and I would like to say a sincere thank you to all the people who helped to make the event a great success, including teachers, children, parents, those who donated prizes and of course those who attended and gave generously on the day.”

Become A Town Councillor And Make A Difference

Would you like to play a part in making decisions affecting Hailsham? Do you have some spare time to become more involved in your community and…

Refuse and recycling rounds are changing in June

Wealden residents are being asked to look out for their new waste and recycling calendar which will be arriving soon.