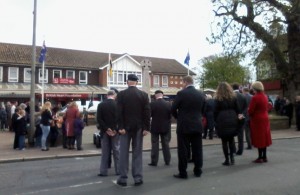 Mayor Councillor Nigel Coltman laid a wreath on behalf of Hailsham Town Council at the town’s ANZAC Day Commemoration Service held at the War Memorial on Sunday [24 April] in remembrance of servicemen from the Commonwealth who lost their lives in war.

A national day of remembrance in Australia and New Zealand, ANZAC Day was originally commemorated by both countries on 25 April every year to honour the members of the Australian and New Zealand Army Corps (ANZAC) who fought at Gallipoli in the Ottoman Empire during World War I.

Town Clerk John Harrison said: “Anzac Day is a time to honour the sacrifice made by others, a sacrifice that has enabled our generation to enjoy the rights of freedom and democracy that Britain and the rest of the Commonwealth offers. Let this always be the case”.

“I’m delighted that many people attended this important service and grateful to them for pay their respects to those who fought at Gallipoli during World War I and for showing their support.”

Hailsham residents are invited to attend the next Annual Town Meeting which takes place at the Civic Community Hall in Vicarage Lane on Wednesday 25th April.…

Hailsham Town Council is calling on residents to nominate which grass verges on public highways in the town should be designated wildflower sites. The announcement for…

Hailsham Town Council has moved to assure residents that the town centre post office will remain open during the Coronavirus pandemic, as an essential service to…

Hailsham Town Council continues to ensure that its flagship recreation ground is maintained to the highest standards for the local community. The Hailsham Recreation Ground in…