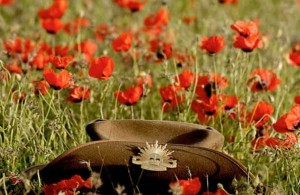 The Town Mayor Councillor Jo Bentley laid a wreath at Hailsham’s Anzac Service held at the War Memorial on Sunday [26 April] in remembrance of servicemen from the Commonwealth who lost their lives in war.

A national day of remembrance in Australia and New Zealand, Anzac Day was originally commemorated by both countries on 25 April every year to honour the members of the Australian and New Zealand Army Corps (ANZAC) who fought at Gallipoli in the Ottoman Empire during World War I.

British forces were also involved at Gallipoli with the 29th Division which landed on the same day, and Anzac Day now more broadly commemorates all those who served and died in military and peacekeeping operations for their countries.

“Anzac Day is a time to honour the sacrifice made by others, a sacrifice that has enabled our generation to enjoy the rights of freedom and democracy that Britain and the rest of the Commonwealth offers. Let this always be the case.”

I’m delighted that many people attended this important Service and grateful to them for pay their respects to those who fought at Gallipoli during World War I and for showing their support.”

The following town councillors were elected on 7 May and attended the annual meeting of Hailsham Town Council yesterday evening [20 May]: Cllr Bridget Beckett, Hailsham…