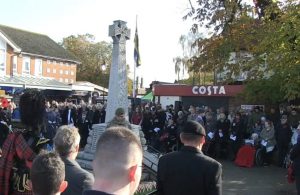 The Town Mayor took part in tributes at this year’s Service of Remembrance which was held at the Hailsham War Memorial on Sunday [10 November], for those who have given their lives in the armed forces and civilians who have paid the supreme sacrifice.

Councillor Paul Holbrook joined other councillors and representatives from the Armed Forces, their families, veterans and local organisations for the playing of the Last Post, observing of two-minute silence and laying of wreaths at 11am.

Grateful to everyone who took time out to attend and remember the fallen, Councillor Holbrook said: “The Remembrance Service was an opportunity and a time for us to reflect and remember the sacrifices made both in the past and in current conflicts and thank them.”

Hailsham man claimed benefits with £50,000 in the bank

Free Listing for Voluntary Groups and Charities in Hailsham

Hailsham Town Council is inviting all non-profit-making organisations, voluntary groups, sports clubs and registered charities within Hailsham to list themselves on its website and advertise on…