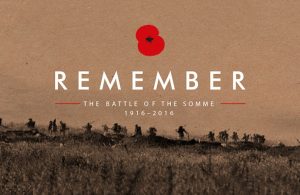 The Mayor of Hailsham Councillor Nigel Coltman is encouraging residents to make a note in their diaries to attend a special ceremony next month which will mark the centenary of the Battle of the Somme.

As part of the nation’s Remembrance of the Battle of the Somme, the Royal British Legion Hailsham & District Branch is inviting residents to take part in its commemoration event at the Hailsham War Memorial on Sunday 10th July.

The event will run from 10.30am to 11.45am, when a Parade will commence from the car park adjacent to the Charles Hunt Centre to the war memorial for the service to start at 10.45am.

The Parade is to be led by the 1066 Pipes & Drums from Hastings, followed by the Padre, Standards of the Royal British Legion and organisations, civic dignitaries, veterans, army and air force cadets, boy scouts, girl guides and other organisations.

The Battle of the Somme took place from 1st July to 18th November 1916 and has come to symbolise the enormous losses and dreadful conditions of the First World War. The Hailsham Remembrance event is just one of many taking place across the country and will be a chance for people to acknowledge the sacrifice of those who died.

These are the names of those who died during the Battle of the Somme whose names are inscribed on the Hailsham War Memorial (research kindly carried out by local historian David Dyer):

Urging people to take time out to remember the fallen, Mayor Councillor Nigel Coltman said: “This special parade and service will give us all an opportunity to come together as a community and commemorate the sacrifice of those who fell for our country at the Battle of the Somme, in particular, those twelve soldiers from Hailsham who were killed.”

“I am extremely proud to be attending the service on 10th July and it is important that as many people as possible come along and show their support.”