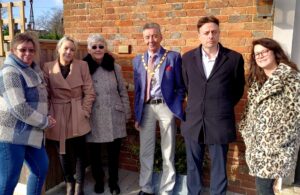 A plaque has been unveiled by the Mayor of Hailsham in memory of former town councillor Glenn Moore, who passed away in February 2019.

“I wanted to do something to remember Glenn and having it at Ersham Farm, of which Glenn was such a great supporter in terms of preventing development on the site in recent years, seemed an appropriate thing to do,” said Cllr Holbrook.

“Glenn was a very popular and respected town councillor, having served the community for many years and caring passionately about Hailsham and its residents. We were all greatly upset by the news that our friend had passed away in 2019 and still miss him to this day. His passing was a huge loss for Hailsham and for everyone who knew him – and we will always remember the big contribution he made to the life and well-being of the local community in which he lived and served.”

“Now, his efforts have been recognised with a plaque at Ersham Farm and we hope the plaque will help keep his memory alive for many years to come.”

Glenn Moore was a well-respected and active member of the local community, having been elected onto the Town Council in May 2015. He represented Hailsham Central & North ward and served on various committees, including the Town Council’s Planning & Development and Neighbourhood Planning Committees, the latter of which he was chairman until he passed away in 2019.

A design, planning and historic consultant by trade, in his role as town councillor, Mr Moore was instrumental in establishing a neighbourhood plan for Hailsham and worked with fellow councillors and other stakeholders to represent the interests of Hailsham and its residents.

Fellow councillor and friend of Glenn’s, Mary Laxton commented: “Glenn, who was chairman of the Neighbourhood Planning Committee in the previous town council administration, highlighted the need for recognition of buildings of historic value in our community. I’m delighted to have attended the plaque unveiling ceremony with Glenn’s widow and family, who happened to be visiting Hailsham from Australia!”

“First of all, I wish all the residents of Hailsham a peaceful and happy Christmas. Similarly, I send every best wish for Christmas to the Hailsham…

Message from the Mayor of Hailsham