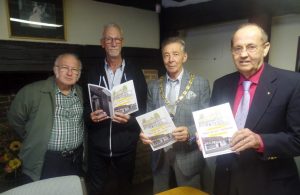 A new book revealing the history of the ‘Fleur de Lys’ building, which is currently occupied by the Hailsham Town Council in Market Street, Hailsham, was officially launched at a special event held at the Town Council Offices today [4 September].

Local historian David Dyer has researched the history of the Fleur de Lys building, sometimes referred to as ‘Inglenook’, a Tudor building which started life in 1540 and is reputably the second oldest house in the town, making it nearly 500 years old.

The Fleur de Lys was originally a country inn in an agricultural community of around 220 people. Increased trade led to an enlargement of the building to accommodate the coaching business. Around 1760, the inn ceased trading and was bought up for the town’s poorhouse.

Later, it was transformed into a workhouse and remained as such until the union workhouse was opened in Hawks Road in 1836.

The Fleur de Lys was then used as an infirmary for the elderly poor but was closed 18 years later and split into leased business units. A devastating fire in 1889 destroyed one third of the building and this section was rebuilt as the town’s fire station, now trading as ‘Kemer Kebab’.

The Inglenook, Hailsham details the history of this important Tudor building including innkeepers, workhouse masters and stories involved with it. It also includes details of the union workhouse plus the story behind the cobbled walls in Stoney Lane.

Town Mayor Cllr Paul Holbrook states that the book achieves its aim of raising the profile of the Fleur de Lys and Inglenook dwelling as the second oldest in the town of Hailsham: “In this new publication, which outlines the varied and eventful history of this magnificent Tudor building, David has studied every inch of the building and the fully illustrated publication covers almost 500 years of its use.”

“Thank you for enlightening us David – and for producing yet another brilliant book covering the history of our wonderful market town.”

“I’m delighted to have been invited to attend the launch. I hope David’s book is a bestseller and local people buy it and find out more about the history of this interesting building.”

RAFA Band Concert to Get You in the Festive Mood

The Deputy Mayor of Hailsham will be among those to attend the Hailsham branch of the Royal Air Force Association’s Christmas Concert on Sunday 3rd December.…

The Hailsham Lions Club is promising a day of fun and entertainment for all on Sunday 7th July at the Western Road Recreation Ground. The Mayor…

The Town Mayor took part in tributes at this year’s Service of Remembrance which was held at the Hailsham War Memorial on Sunday [11 November], for…

The Mayor of Hailsham, Councillor Paul Holbrook, took part in a special ceremony to mark the opening of the newly refurbished Linden Lodge Kennels & Cattery…