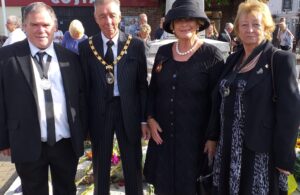 The Town Mayor and Chairman of Hailsham Town Council, Cllr Paul Holbrook, has issued the following statement concerning the passing of Her Majesty Queen Elizabeth II last Thursday [8 September] and the Proclamation of King Charles III:

“It is with great sadness that we have heard of the death of Her Majesty Queen Elizabeth II. The Council Members and Officers of Hailsham Town Council are deeply saddened, and our thoughts and heartfelt condolences are with the Royal Family at this difficult time.”

“Her Majesty’s eventful and extraordinary life has without hesitation or falter, been dedicated to serving the people, and the Town Council wishes to pay tribute to her unflagging dedication, and selfless devotion to duty, as well as her deep level of commitment and generosity-of-spirit.”

“Her Majesty lived a life of selfless devotion to the people of the United Kingdom and the Commonwealth, and her passing is a cause for great sadness to each and every one of us. Furthermore, we recognise the very personal loss that members of the Royal Family are feeling at this difficult time.”

“Her Majesty took the throne in 1952, making her the longest-serving British monarch in history, and for many – in fact the majority of people in the UK – she has been a constant throughout their lives and reigned through some troubled times and significant social and historical change throughout her life. Her passing brings to a close a lifetime of extraordinarily dedicated public service and it goes without saying that her death marks the end of an era.”

“Of course, we join with many, many people across the world as we mourn the loss of Her Majesty Queen Elizabeth II. Her spirit to Public Service was an inspiration for us all and her dedication to duty to the people will ensure that she will be forever remembered.”

“I would like to take this opportunity to let you all know that there is a Book of Condolence available in the Mayor’s Parlour for those who wish to pay their respects. Also, further floral tributes can be laid at the Hailsham War Memorial.”

“I’d like to thank residents for attending the special event held at the War Memorial on Sunday to witness the town’s official Proclamation of King Charles III and announce the new monarch. Among those in attendance were representatives from Hailsham Town Council and Wealden District Council, as well as the Deputy Lieutenant of East Sussex, local veterans and emergency services staff.”

“This is the first time in a generation that we have observed the proclamation of a new monarch and head of state and it goes without saying that this is an important constitutional milestone to mark the succession, whilst paying their respects to Her Majesty, Queen Elizabeth II.”

A Book of Condolence has been set up in the Mayor’s Parlour adjacent to the reception area of the Town Council Offices in Market Street, and is available for the public to write their messages of condolence in from 9am-4pm Monday to Friday until 4pm on the day following the funeral.

The national period of mourning will continue until the end of the day of the State Funeral and the Town Council will be following national protocol and advice during this time.

As a mark of respect, the Union Flag and Hailsham (Town Council) flag are being flown at half-mast at the Hailsham War Memorial, until the day following the State Funeral.

Also, as a mark of respect, all Town Council meetings (including Committee meetings) have been postponed until after the State Funeral.