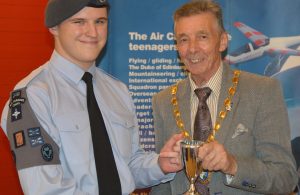 The Mayor of Hailsham was a guest of honour at the 249 Hailsham (The Millennium) Squadron’s RAF Air Cadets Annual Presentation Evening on Friday [27 September], personally handing out some of the accolades to cadets who have worked hard to achieve goals throughout the past year.

Other guests of honour included the Lord Lieutenant of East Sussex Mr Peter Field, the Chairman of East Sussex County Council and Wealden District Council, as well as representatives of the Royal Air Forces Association and Royal British Legion and parents.

Cadets where presented with many awards including those for Best Cadet, Best Attendance and Chairman’s Cup for Sport. The Mayor of Hailsham presented the Treasurers Cup for Effort to Cadet J. Cooper-Lloyd as he had attended all but one of the squadron community events last year.

The final Award of the evening was the ‘Hailsham Mayor’s Cadet’, presented to Cadet Sergeant G. Gadsden by the Mayor himself. This is the first time the town has had a Mayor’s Cadet award and Cadet Sergeant Gadsden will be accompanying Mayor Cllr Paul Holbrook to some civic events throughout the year to help promote the air cadets and the town.

Councillor Holbrook commended award winners, parents and everyone involved in the Squadron: “I was delighted to be invited along to present the cadets with their awards, and I was particularly pleased to have the opportunity to speak with the cadets and hear about the hard work that helped them achieve these prestigious awards.”

“The Air Training Corps is such a valuable organisation to have in the local community, providing worthwhile and exciting opportunities for young people and preparing them for later in life.”

“I wish to pass on my congratulations to all the cadets who were presented with trophies at the award ceremony. In fact, all the cadets have been outstanding this year – the 249 Hailsham Millennium Squadron is always on top form and the cadets always give 100%.”

Warrant Officer Tina Calvert said: “As Officer in Charge of the Squadron I feel that it is a great honour for all the cadets and staff that we are able to provide the first Hailsham Mayor’s Cadet and I know that Cadet Sergeant Gadsden will do a fantastic job to help promote the youth of the town and the town itself.”

“The evening was a great success and was enjoyed by all those who attended. We had many positive comments from the guests about what wonderful young men and women the cadets are.”

Message from the Mayor of Hailsham

Do you know someone working for the benefit of the Hailsham community or who has committed an outstanding act of bravery or community service? Why not…

The Mayor of Hailsham Councillor Nigel Coltman is encouraging residents to make a note in their diaries to attend this year’s ANZAC Day Commemoration Service. Anzac…