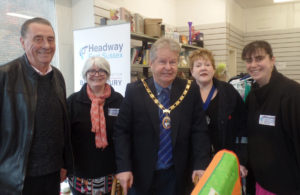 The Mayor and Deputy Mayor of Hailsham have opened a new pop-up shop in the town centre, which will be open for the next two weeks for people to donate unwanted items to raise money for the Headway East Sussex charity.

Councillors Nigel Coltman and Amanda O’Rawe were joined by representatives of Headway East Sussex including its Chief Executive Michele Fleming, to cut the ribbon and declare the pop-up shop at 41 High Street (former mobile phone shop) officially open to the public.

Headway East Sussex, which is affiliated to the national charity Headway UK, offers rehabilitation and support services for people with acquired brain injuries, their families and carers, as well as a variety of advice and support services to those affected across the whole of East Sussex including Brighton and Hove and parts of West Sussex.

Members of the public can take their new or used items (including working electrical goods) to the pop-up shop between during the two-week period from Monday 19th February (Mondays to Saturdays from 10am to 3.30pm).

“I am delighted to be able to take part in the official opening of the pop-up shop and hope that as many people as possible pop along and donate their unwanted items,” said Councillor Nigel Coltman.

“It’s good to see the community working together to support people who are living brain injuries and we should all be extremely grateful to the amazing people who fundraise for Headway East Sussex. Every item donated – and every penny raised – will provide vital support to those who need it.”

Deputy Town Mayor Councillor Amanda O’Rawe commented, “I invite everyone to spare the time to visit the pop-up shop over the next two weeks and help raise funds for this very worthy cause. Unused electrical equipment, household items, furniture, clothes, ornaments, books and collectors’ items – any item in good or working condition will be gratefully received.”

The Deputy Mayor of Hailsham will be getting into the summer spirit when he joins in the celebrations of the Hailsham Choral Society’s next concert, ‘Folk…

In his weekly message to residents, the Mayor of Hailsham Cllr Paul Holbrook praises youth workers for continuing to ensure that local young people stay safe,…

The Mayor of Hailsham will join in the celebrations of the Hailsham Choral Society’s 60th Anniversary concert, ‘Messiah’, which will be held at All Saints Church…

The Town Mayor, Cllr Paul Holbrook, benefited from a tour of the Hailsham Heritage Centre & Museum on Friday [6 May], which has reopened to the…