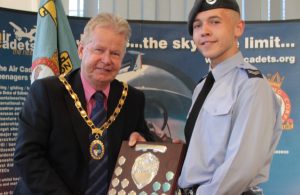 The Mayor and Deputy Mayor of Hailsham were guests of honour at 249 Hailsham Millennium Squadron’s Annual Awards Presentation Evening last Thursday [29 June], personally handing out some of the accolades to cadets who have worked hard to achieve goals throughout the past year.

Hailsham Mayor Councillor Nigel Coltman presented the trophy for the Best Sports Flight to Cpl Whiting representing Venom Flight and the Chairman’s Cup for Sport to the 6-a-Side Football Team, who came 2nd in their group at the Sussex Wing Tournament earlier this year.

Councillor Coltman commended award winners, parents and everyone involved in the Squadron: “I was delighted to be invited along to present the cadets with their awards, and I was particularly pleased to have the opportunity to speak with the cadets and hear about the hard work that helped them achieve these prestigious awards.”

“The Air Training Corps is such a valuable organisation to have in the local community, providing worthwhile and exciting opportunities for young people and preparing them for later in life.”

“I wish to pass on my congratulations to all the cadets who were presented with trophies at the award ceremony. In fact, all the cadets have been outstanding this year – the 249 Hailsham Millennium Squadron is always on top form and the cadets always give 100%.”

In his opening speech, Squadron Commanding Officer Craig Thomson said: “It had been anther busy year for the Squadron with cadets taking part in many Community Events and Parades in the town, always looking smart and proud.”

“Several cadets had attended Summer Camps at RAF Stations, which had given them experience of life in the Air Force. The squadron had been well represented at sports events with several cadets winning medals and the Squadron had also represented Sussex Wing at the London and South-East Region Drill competition where they gave a good account of their skills.”

The evening ended with a very special presentation whereby the Lord Lieutenant of East Sussex, Mr Peter Field, awarded the Squadron’s special guest, Mr George White, with the Legion d’Honneur. Mr White had joined the newly formed RAF Regiment in 1942 whose role was to seize, secure and defend airfields to enable air operations to take place. He was present at the D-Day landings and fought throughout Europe including France and Belgium.

The Mayor of Hailsham will attend the Royal Air Force Association’s Battle of Britain commemorative service on Sunday 15th September at Hailsham Parish Church at 10.30am.…

In his weekly message to residents, the Mayor of Hailsham Cllr Paul Holbrook is asking everyone in the local community to continue to maintain social distancing…

New Businesses Set Up Shop in Hailsham in 2020

During the past year, Hailsham has welcomed a range of new businesses, resulting in there currently being a small number of empty retail units in the…

A local care home resident celebrated his 100th birthday in style with friends, family and the Mayor of Hailsham today. Ray Davey of Marshview Care Home…