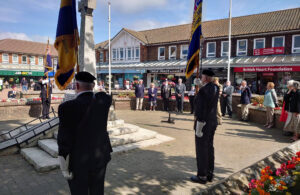 The Mayor of Hailsham and other Town Council members attended the Royal British Legion’s Sussex County Torch Relay Service, which was held at the Hailsham War Memorial this morning [Wednesday 25 August] and attended by veterans and members of the public.

The Royal British Legion commemorated the 100th Anniversary of its formation on 15th May, and the Sussex County Remembrance Team have organised, with the help of some of the local branches including Hailsham & District, an ‘RBL 100 Torch Relay’. This will take place this week and finish on Saturday.

“The Torch Relay service is an opportunity and a time for us to reflect and remember not only the fallen and the sacrifices made both in the past and in current conflicts, but also the Royal British Legion itself,” said Town Mayor Cllr Paul Holbrook, who attended the service along with other Town Council members.

“We should all do our best to acknowledge and appreciate the achievements of RBL volunteers, members and fundraisers over the last century, and take the time to pay tribute to them.”

“It was a privilege to be able to support The Royal British Legion in marking their achievements at this event.”

As we reflect on our achievements over the last century, we pay tribute to the volunteers, members, fundraisers, and partner organisations who are at the heart of everything we do.”

If you would like to be part of the the Royal British Legion Hailsham & District activities, please contact the branch secretary, Steve Leonard by email: swl019550@gmail.com.

Running races are set to make a big comeback in Hailsham, and event organisers are delighted to confirm that applications will be open soon for people…