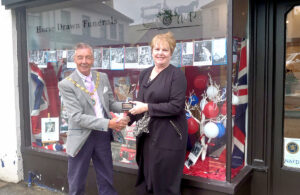 R. Butler & Sons has received first prize in a search to find the best dressed jubilee window display in Hailsham.

The funeral directors located in Station Road was chosen by the Mayoress of Hailsham Councillor Barbara Holbrook, Paul Gibson from Hailsham News and Fred Palmer from the Hailsham & District Chamber of Commerce as the winner of the competition, which follows on from the popularity of the annual Dressed Window Competition held at Christmas, whereby winners were awarded for their creative efforts.

Several shop displays were short-listed for the best dressed jubilee display award, those which were appropriately decorated to complement the Platinum Jubilee flags and bunting in the town centre, and judged on visual impact, creativity and artistic merit, as well as inventive use of materials and effort.

However, there was no topping the efforts of R. Butler & Sons, which impressed judges with their front window display which featured a montage of photos of Her Majesty the Queen, in addition to a tree created from red, white and blue balloons.

The runner-up prize went to the Demelza Hospice Care for Children charity shop in the High Street and other displays which were praised by judges included Hot Dogs Grooming in George Street, Maybugs and Flowers By Maybugs in Vicarage Field and Bloomfields Florists in the High Street.

Manager of R. Butler & Sons, Shirley Mancer-Bailey was delighted when the Mayor of Hailsham, Cllr Paul Holbrook, dropped in to hand out the special award. She said, “I am proud and delighted to have won this competition. I always enjoy organising various window displays at R Butler & Sons.”

“It’s been fantastic to see the local community come together over the last few weeks to celebrate the Queen’s Platinum Jubilee and I would like to say a big ‘Thank You’ for the acknowledgement.”

Councillor Holbrook commented, “We thoroughly enjoyed celebrating Her Majesty the Queen’s 70th anniversary of her reign as British Monarch and it goes without saying that it was a very special time for each and every one of us.  The window display competition certainly complemented the town centre’s flag and bunting displays, as well as lifted the spirits of residents and visitors up to and including the extended bank holiday weekend.”

“My fellow judges and I were impressed by the way that R. Butler & Sons, as well as many other businesses in the town centre embraced the special occasion. I’d like to thank all those who took the time and trouble to set up such brilliant displays, as well as my colleagues for helping to organise the competition and select the winner.”

Countdown to This Year’s Hailsham Festival

The Hailsham Lions Family Fun Day, which took place at the Western Road Recreation Ground on Sunday [18 July], has been well received by the public…

The eagerly awaited Hailsham Song for Christmas will arrive on Monday [17 December], bringing together local businesses all in the name of charity. More than 60…

Hailsham Town Council is inviting all non-profit-making organisations, voluntary groups, sports clubs and registered charities within Hailsham and surrounding villages to advertise themselves on its website…