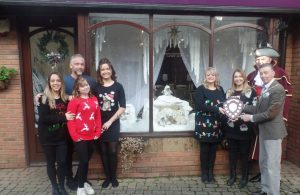 NV Hair Studio has received first prize in a search to find the best Christmas shop window display in Hailsham.

The hairdressers in St Mary’s Walk was chosen by Hailsham Forward and the Town Council as the winner of this year’s competition set up to encourage businesses to decorate their shop fronts during the festive season.

Several shop displays were short-listed for the award in Hailsham town centre this year, including those produced by Honey Bee Hair in George Street and R. Butler & Sons Funeral Directors in Station Road.

However, there was no topping the efforts of NV Hair Studio which also won the award in 2017, this time impressing the judges with their front window display which incorporated a Winter Wonderland theme in the window and decorated window boxes outside the premises.

Studio staff members were delighted when the Mayor of Hailsham, Cllr Paul Holbrook, dropped in to hand out the special award.

“We’re very pleased to have won the Best Shop Window Christmas Display this year,” said proprietor Gail Wild, who personally received the award along with her business partner Lisa Kennedy.

“As a relatively new business just opening a couple of years ago, we would like to thank all our customers for their lovely comments and support so far.”

Windows were judged on visual impact, creativity, artistic merit, inventive use of materials and effort.

Councillor Holbrook said: “We were impressed by the way that some shops had continued their festive theme inside, with many having decorated trees, hanging baubles and tinsel throughout. The dressing-up and decorating of shop windows for Christmas clearly enhances the festive spirit of this important retail period.”

“I’d like to thank all those shops who took the time and trouble to set up such brilliant displays, as well as my colleagues at the Town Council and Hailsham Forward for organising the competition.”

Monitoring and Protection of Trees in Hailsham

Have you noticed any dead, diseased or dangerous trees in Hailsham’s public open spaces? Do you wish to report damage or vandalism to protected trees in…

Submit Your Grant Applications for 2020/21

Improvement Plans for the Common Pond: Hailsham’s ‘Jewel in the Crown’

Additional improvement work is set to be carried out at the Common Pond site in the future, as part of the Town Council’s obligation to ensure…