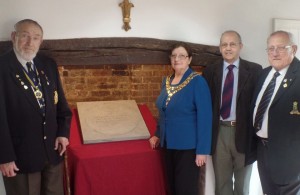 A commemorative paving stone is set to be unveiled in Hailsham next year to honour the memory of Victoria Cross holder, Company Sergeant Major Nelson Carter.

The Victoria Cross is the most prestigious award for gallantry in the face of the enemy that can be awarded to British and Commonwealth forces and the commemorative stone is part of a national scheme that will see every Victoria Cross recipient of the First World War – 628 in total – commemorated with a paving stone in their place of birth.

The first Victoria Cross paving stones were laid in towns around the UK in August 2014 and each ceremony will take place 100 years to the day since each recipient’s actions.

Nelson Victor Carter was born in Eastbourne on 9 April 1887 and was raised and educated in Hailsham. In December 1902 he enlisted under the name of Nelson Smith into the Royal Field Artillery, but was discharged in August 1903 as medically unfit.

Declared fully fit in August 1906 he again enlisted into the RFA and served three years with the regiment. However, whilst on service with the RFA in Singapore he was once again declared medically unfit and returned to England and discharged.

Upon the outbreak of WWI, Carter joined Lowther’s Lambs in September 1914, promoted corporal on the same day, then sergeant and later Warrant Officer Class II.

He was then was sent to France attached to ‘A’ Company, 12th Bn, Royal Sussex Regiment, and served with this detachment until his death on the 30th June 1916 whilst winning his Victoria Cross.

The Victoria Cross stone will be installed next to the war memorial in Hailsham High Street during a special ceremony which will take place in June 2016, marking the 100th anniversary of Company Sergeant Major Carter’s act of gallantry that won him the prestigious Victoria Cross during the early years of the First World War.

“The Town Clerk John Harrison and I sought permission from the Department of Communities & Local Government to honour Company Sergeant Major Nelson Victor Carter VC by purchasing a commemorative Victoria Cross stone to honour his courage and provide a lasting legacy of this Hailsham-raised and educated hero, a true son of Hailsham.

But this stone will also serve as a representation of the bravery of all born, raised or educated in our town who served in the First World War and of the sacrifice of those who fell.”

“It is an honour and a privilege to have the VC commemorative paving slab laid in front of Hailsham War Memorial. By doing this it adds more meaning, not only to the name of Company Sergeant Major Nelson Victor Carter, but also to the other names of those who gave their lives under difficult conditions in the fight for freedom of the world at that time.”

Local historian and researcher Dave Dyer, author of The Heroes of Hailsham , which was published in 2011 to commemorate the 90th anniversary of the Hailsham War Memorial said:

“Company Sergeant Major Nelson Victor Carter VC was a true son of Hailsham, the town where he was brought up and educated. His parents lived in Hailsham for many years afterwards and some family descendants still live here. It is a great honour for Hailsham to have this commemorative stone and residents should be proud of what it stands for and remember his supreme act of gallantry.”

An innovative approach to justice which can help keep families together is being launched in East Sussex.

Local Wealden businesses who have been turned down by the banks will still be able to access finance thanks to new scheme being launched by Wealden District Council and EDEAL.