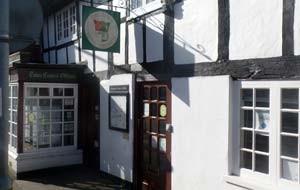 Councillor Nigel Coltman has been re-elected Town Mayor and Chairman for another year at the annual meeting of Hailsham Town Council held on Wednesday [25 May].

During his address, the Mayor stated that it had been a busy but productive year for the Town Council and thanked all those who had contributed to its many achievements, for helping to provide better facilities for Hailsham and revitalising the town in the process.

Councillor Coltman said he was privileged to be voted in again as Mayor: “Thank you each and everyone for having faith in me. It is a privilege to continue in my role as Town Mayor for a second term.”

“I am very much looking forward to a productive year ahead and the Town Council hopes that it will continue to achieve the objectives set out when we were elected last year. There is still a lot more work to be done and many more good things to be achieved by the Town Council.”

“I’d like to extend my thanks to Councillor Amanda O’Rawe for her support as Deputy Mayor and Vice-Chairman during the past year, and congratulate her for being elected Deputy Mayor again for 2016/2017.”