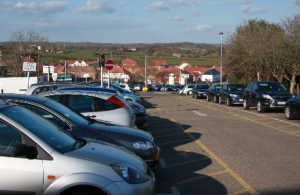 More doctors’ surgeries, improved traffic flow and more affordable housing in Hailsham in the future…. These are just some of the findings of a recent survey carried out by Hailsham Town Council’s Neighbourhood Planning Team, announced last week.

Residents were given the opportunity to complete the questionnaire, which is part of the Neighbourhood Planning Committee’s public consultation exercise aimed at gathering views on what is needed in Hailsham to support future housing development, also taking into consideration local environment and sustainability, design, traffic and transport, economy, services and facilities.

Nearly 1,400 questionnaire responses were submitted and the majority of participants stated the need for improved infrastructure in Hailsham ahead of forthcoming housing development, with particular concern over roads and transport, schools and medical facilities.

According to the survey, 54.4% of respondents said access in and out of the town should be a priority in the future. Other transport-related priorities stated include traffic congestion (67.5%) and parking – particularly near to schools and doctors’ surgeries (41.8%). Only 10.2% said there was a need for additional speed bumps or traffic calming in the local area.

Of those who took part, 45.8% agreed that a mix of open market homes and low cost housing is important in terms of future housing needs, while 75.4% believe more affordable housing will be required between now and 2030. 55.4% of respondents stated that they are happy with the current cost of housing in Hailsham.

A majority of 62.5% of respondents considered town centre facilities to be ‘insufficient’, with 17.5%, 43.4% and 27.5% believing that the current retail offering is good, adequate and poor respectively.

81% emphasised the need for more clothes shops, and there was a general consensus among respondents over the need for additional street furniture and an overall better choice of retail shops (including more national/high street brands).

53.3% of respondents stated that medical services provision in Hailsham are inadequate and that more doctors surgeries are needed to sustain future population growth, while 78.4% and 43.2% are happy with the current sports facilities and local job provision respectively.

52.3% of respondents disagreed with supporting the development of an additional out-of-town retail park, only 7.4% stated the need for additional retail/business parks and 66.2% expressed the importance of higher speed internet access in the future.

“Thank you to everyone who took part in our questionnaire survey and provided feedback on what key issues should be covered in the emerging Hailsham Neighbourhood Plan,” said Councillor Glenn Moore, chairman of the Neighbourhood Planning Committee.

“It’s crucial that we gather as much feedback as possible from the public and ask them to comment on what they consider to be the most important elements of improved town infrastructure to support future housing and population growth in Hailsham, which is why we launched the survey in June.”

Town Clerk John Harrison said: “Through this public consultation survey, we’ve gathered additional evidence about Hailsham’s current and future needs and the information received will provide the basis for the draft Neighbourhood Plan as a reflection of the consensus views of residents and the local community.”

The Neighbourhood Planning Team will now plan the next phase of the project, which is utilising the information obtained from the questionnaire survey to enable various sub-groups to look at specific areas, including housing, environment and infrastructure.

More information on the Hailsham Neighbourhood Plan can be found here.

At a series of meetings held by the Neighbourhood Planning Sub-Committee, town councillors and residents responded to a number of issues on how the ‘preferred option’…

Town councillors have agreed to inject an additional £80,000 funding for the production of a Neighbourhood Plan for Hailsham to help shape the development and future…