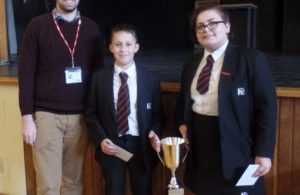 At the awards presentation, both recipients were awarded jointly with an inscribed silver cup (to be on display at Hailsham Community College), and individually with inscribed key rings.

These were presented by Town Mayor Councillor Nigel Coltman and Elliot Curryer, grandson of the late John Britton. John was Hailsham & District Youth Leader from 1970 to 1987 and much loved in the local community. Also present was John’s wife Ruth.

Joint award recipient Savanna Melvin, aged 15, was nominated to receive the accolade for being a hard-working carer to her father who is debilitated by complex health issues that have affected the whole family.

When she was in Year 6, her father’s health issues accelerated and he became housebound and largely socially isolated. As a result, Savanna began to take a more proactive role in her father’s care, supporting him and her mother in their daily lives.

The other recipient this year, 11-year old Zachary Newman, was nominated for his fundraising efforts, having raised money for a friend of the family who was recently diagnosed with terminal cancer.

Zachary’s fundraising activities included a sponsored 1-mile (1600m) swimming course, from which he has raised a total of £435 for Macmillan Cancer Care to date.

Councillor Coltman said that receiving this prestigious accolade is a great honour and one both recipients richly deserve: “Today, there are many different activities going on in Hailsham for young people to get involved in. It takes a skilled and genuine person to have the impact on young people that John Britton did.”

“The fact that this award is being offered gives us a brilliant opportunity to recognise that young people do a lot of positive things with their lives. Savanna and Zachary should be proud of their dedication, selflessness and support towards others in need. Thank you, congratulations and well done to them both.”

Ruth Britton, founder of the John Britton Award who was one of those on the judging panel, said: “I heard that, for several years, Savanna has been an amazing carer for her father, which has been a great help to her mother too. It’s a great credit to her that she has lovingly cared for her father and put his needs before her own social life.”

“Likewise, Zachary has shown compassion and determination in raising money for Macmillan, helping people with cancer. I was very impressed to hear of his swimming distance and the large amount of money he raised for such a worthy cause.”

Next Round of Friday Night Project Activities for Young People

Hailsham Town Council’s Youth Service continue to go grow, providing a range of opportunities and activities for young people in the town between the ages of…