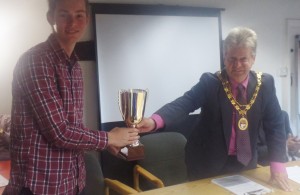 Mark, aged 19, was given a shield and a trophy inscribed with his name by the Mayor of Hailsham Councillor Nigel Coltman and Joanna Bingham, the younger daughter of the late John Britton, who was District Youth Leader from 1970 until 1987 and much loved in the local community. Also present were John’s wife Ruth and their grandson Elliot.

Mark served as a member of Hailsham Youth Council from 2008-2012 of which he was Chairman and Assistant Chairman during that time, and was instrumental in the youth council’s campaign to construct a new skate park next to the Maurice Thornton playing field and putting forward proposals for the town first outdoor gym on the Western Road recreation ground.

He has carried out extensive voluntary work in recent years, including experience as an animal keeper at Knockhatch Adventure Park, youth work for Hailsham Christchurch and community development projects in Uganda supporting the work of The Quicken Trust.

He completed work as a volunteer for Big Cat Rescue in Tampa, Florida earlier this year, and will be returning there to continue his work for three months in September.

Town Mayor Councillor Nigel Coltman said that receiving this prestigious accolade is a great honour and one Mark richly deserves: “Today, there are many different activities going on in Hailsham for young people to get involved in. It takes a skilled and genuine person to have the impact on young people that John Britton did.”

“The fact that this award is being offered gives us a brilliant opportunity to recognise that young people do a lot of positive things with their lives.”

“Mark genuinely cares about making a difference in the lives of others in the local community and has accomplished a great deal with such endeavours. I wish him every success in the future.”

John Britton, formerly based at Hailsham Community College, was Hailsham and District Youth Leader from 1970 until 1987, and was much loved and respected by those who knew him.

Having encouraged teenagers to become involved with people in the community such as Mencap and the elderly, it is because of his desire to motivate youngsters through helping others, that his wife Ruth and daughters Lorraine and Joanna felt that his work should be reflected by way of the introducing the Youth Community Award six years ago.

Ruth Britton, who was one of those who nominated Mark for the award said: “This year’s Award recipient Mark Joyes is a gifted individual who is a role model to the young people of Hailsham. I’m pleased to give him the recognition he deserves and would encourage others to follow his example.”

“Well done Mark for everything you have achieved for the young people of Hailsham.”