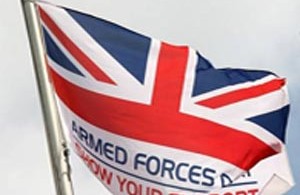 The Mayor of Hailsham Councillor Nigel Coltman has raised a commemorative flag at the High Street War Memorial, in honour of Britain’s service men and women, past present and future.

A special event marking the contribution made to our country by those who serve and have served in Her Majesty’s Armed Forces was held this morning [21 June], at which town councillors and local residents attended.

The specially-commissioned flag will take pride of place until after British Armed Forces Day on Sunday 26 June.

Following the event, which was also attended by veterans, cadet and representatives of the Royal British Legion and Royal Air Forces Association, Councillor Coltman said: “Now, more than ever, it is appropriate to recognise the contribution of our armed forces, securing our safety and peace. Armed Forces Week is a time of remembrance and thanks to all past and present service men and women, and an opportunity to show our support for them in the duties they do throughout the world.”

“We don’t often have time to pause in our busy lives to consider the brave work they do for our country, and it was a tremendous privilege to lead Hailsham’s flag-raising ceremony as one of my first official duties as Town Mayor.”

Town Clerk John Harrison said: “It’s always a pleasure and I’m very proud to play a small part in these ceremonies, by honouring all who have risked their lives for us and thanking them for everything they have done.”

“In Hailsham, we are committed to working very closely with representatives form the Royal British Legion and Royal Air Forces Association and our co-operation was reaffirmed last year with the purchase of a commemorative paving stone to honour the courage of Hailsham-raised Victoria Cross recipient Sergeant Major Nelson Carter, providing him with a lasting legacy for the town.”

“We will continue to give our servicemen and women the support they deserve.”

A special service to mark Armed Forces Day itself will be held at the War Memorial on Sunday [26 June] at 11am, which will be attended by representatives from the Royal British Legion, Royal Air Forces Association and the ATC 249 Millennium Squadron.

For more information on the Armed Forces Week celebrations taking place around the country, and how you can take part, visit www.armedforcesday.org.uk

A commemorative paving stone is set to be unveiled in Hailsham next year to honour the memory of Victoria Cross holder, Company Sergeant Major Nelson Carter.…

Memorial Stone to be Unveiled for Local VC Hero

A commemorative stone is to be unveiled in Hailsham to honour the memory of Victoria Cross recipient, Company Sergeant Major Nelson Victor Carter. Marking the 100th…