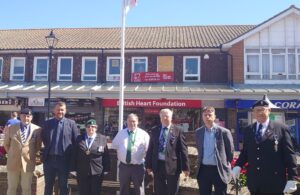 A commemorative flag has been raised at the Hailsham War Memorial, in honour of Britain’s service men and women, past present and future.

A special service marking the contribution made to our country by those who serve and have served in Her Majesty’s Armed Forces was held this morning [Monday 20 June], attended by the Deputy Town Mayor, local councillors, veterans and Royal British Legion Hailsham & District branch representatives.

The specially commissioned flag will take pride of place until after British Armed Forces Day on Saturday 25th June.

Following the raising of the flag, Deputy Town Mayor Councillor John Puttick said: “Now, more than ever, it is appropriate to recognise the contribution of our armed forces, securing our safety and peace. Armed Forces Week is a time of remembrance and thanks to all past and present service men and women, and an opportunity to show our support for them in the duties they do throughout the world.”

“We don’t often have time to pause in our busy lives to consider the brave work they do for our country, and it was a tremendous privilege to carry out Hailsham’s flag-raising ceremony as Deputy Mayor.”

Councillor Puttick added: “In Hailsham, we are committed to working very closely with representatives from the Royal British Legion and Royal Air Forces Association and our co-operation was reaffirmed just a few years ago with the purchase of a commemorative paving stone to honour the courage of Hailsham-raised Victoria Cross recipient Sergeant Major Nelson Carter, providing him with a lasting legacy for the town.”

“We will continue to give our servicemen and women the support they deserve.”

For more information on the Armed Forces Week celebrations taking place around the country, and how you can take part, visit www.armedforcesday.org.uk.

Hailsham’s much-needed post office, which opened its doors in the town centre a couple of months ago, has received lots of positive feedback from residents. The…

Latest information about the forthcoming elections.

On Thursday 7 May, residents will have the opportunity to vote for who will represent them on Wealden District Council

People living or working in Hailsham are being invited to attend the next Hailsham Residents’ Forum, which takes place next month. The aim of the meeting,…