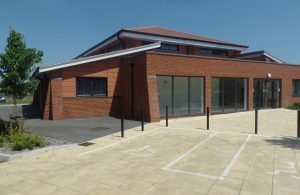 Hailsham Town Council is pleased to announce the exciting news that the new state of the art James West Community Centre, located in Brunel Drive, will be formally opened at 1pm on Saturday 13th October.

The opening ceremony will be performed by the Deputy Lieutenant of East Sussex Mr Miles Jenner, who will unveil a special commemorative plaque.

The event will be attended by the family of the late James West (founder and Chairman of the Hailsham & District Sports Alliance who passed away in November 2016) and town councillors, including the Deputy Mayor of Hailsham, Cllr Grant De Jongh.

Members of the public are invited to attend and there will be an opportunity to look around the centre to see what facilities are available. Some of the groups that have already used the centre since it opened its doors to the public in June will be in attendance to provide demonstrations of their activities.

“We are really excited the James West Centre will have its official opening later this month, a centre which has already benefited community, sports and private function hirers since it opened to the public in June,” said Deputy Mayor Cllr Grant De Jongh.

“The centre is an outstanding facility and has already proved to be a great addition to the Hailsham community. I’m aware that Town Council staff, including Centre Manager Robert Boxer, have been working hard in the lead up to the opening, and I’m delighted and grateful that the office of the Lord Lieutenancy has agreed partake in the ceremony.”

“I would encourage everyone to come along to the opening and find out what the facility has to offer.”

The James West Community Centre consists of an 18m x 11.7m hall, able to accommodate an audience of around 200 seated for licensed public performances.

The facility can be hired for community events, sports, business meetings, memorial services, youth groups and other social events, as well as private function hire.

For further information about the James West Community Centre, or to make a booking, contact Hailsham Town Council on 01323 841702 or by email: enquiries@hailsham-tc.gov.uk.

The Town Council offices in Market Street continue to house its resident and visitor information point situated in the front reception. Visitors to the town and…

Town Council officials in Hailsham have issued an appeal for information after vandals broke into and damaged the public toilet facility in North Street. The public…

As the Town Council continues to review its service delivery for residents in response to COVID-19, new measures in relation to burial arrangements at Hailsham Cemetery…