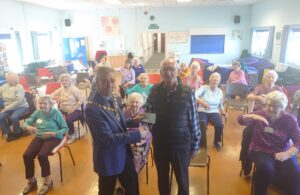 A grant of £100 has been given to the Charles Hunt Centre in Hailsham, one of a number of recent donations to local community groups and voluntary associations given by the Town Mayor as a result of coming in under budget on his allocated allowance for the last financial year.

Town Mayor Cllr Paul Holbrook presented a cheque to Age Concern Hailsham Chairman Alan Faulkner at the Charles Hunt Centre on Wednesday [13 April], funds from which will go towards providing activities and services to the older people of Hailsham and surrounding areas.

In his role as mayor, Cllr Holbrook receives a yearly allowance to cover events and other costs associated with the office of Town Mayor, but in the previous financial year, he did not utilise all the allowance and stated that he would donate what was remaining to twelve local community, voluntary associations and charities, as well as other local initiatives.

“I am delighted to be in the position to donate money from last year’s mayoral allowance to the Charles Hunt Centre,” said Cllr Holbrook. “Staff and volunteers at the centre should be praised for their unstinting hard work and contribution given for the good of the community.”

“Much of what has been achieved by the Charles Hunt Centre has been the result of a considerable degree of enthusiasm and commitment of volunteers in delivering vital services that support older citizens and help prevent loneliness.”

“For many years, I’ve witnessed some of the events and activities put on at the centre, and seeing how the money raised to maintain the venue is being used and helping with the well-being of our older population.”

The Charles Hunt Centre is a registered charity and, currently, the majority of the membership are over 80 years old. Members participate in bowls, Movement to Music, quizzes, beetle drives, bingo, film afternoons and singalongs, among other activities.

Additional services include weekly toenail cutting and monthly hearing aid sessions, and members will soon be able to access the services of a local solicitor at the Centre.

Freshly cooked two-course lunches are available to members and non-members and a number of fundraising activities are planned throughout the year which are open to the community, such as quiz evenings, table top sales, craft fairs, bingo and games evenings.

A local care home resident celebrated her 100th birthday in style with friends, family and the Deputy Mayor of Hailsham on Monday [3 April]. Kathleen Wilkinson…

Latest Message to Residents from the Mayor of Hailsham

In his weekly message to the residents of Hailsham, Town Mayor and Chairman Cllr Paul Holbrook ensures people that the Council continues to work towards reopening…

Mayor’s New Year Message to the People of Hailsham

“I hope everyone had an enjoyable Christmas break with their family, friends and loved ones. As we get back to our normal routines, it is time…

In his latest message to the residents of Hailsham, Town Mayor and Chairman of Hailsham Town Council, Cllr Paul Holbrook, praises people for ‘shopping local’ in…