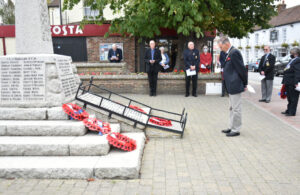 A service of remembrance was held at Hailsham War Memorial on Sunday [20 September] for all those who took part in the Battle of Britain during the summer and autumn of 1940.

Town Mayor Councillor Paul Holbrook joined fellow town councillors war veterans and uniformed dignitaries for a ceremony which marked the 80th anniversary of the Battle of Britain and former British fighter pilots’ involvement in fighting attempts by the German Air Force to gain superiority over the RAF during World War Two.

The Battle of Britain was a major air campaign fought in the skies over the UK in 1940, and although the battle took place between July and October, 15 September saw the British Royal Air Force gain a victory over the Luftwaffe in what was Germany’s largest daylight attack.

The service in Hailsham was held on a much reduced scale and there was no parade this year, due to coronavirus restrictions. Members of the public were not asked to attend, but the service was made available online for people to watch.

“It was a great honour to be part of the Battle of Britain dedication service,” said Town Mayor Councillor Paul Holbrook after the service. “As well as remembering the loss of many brave airmen, we had the opportunity to show our respect to all those other servicemen and women who sacrificed their lives through bravery so that we all may continue to live in freedom.”

“Although the service this year was a much smaller and low-key version of what normally takes place, regardless of the pandemic, it was essential that we held a service enabling us to pay our respects to those who fought so hard 80 years ago for our freedom.”

He added: “The service was organised with the safety of those attending and with strict social distancing measures in place.”

The Town Council offices in Market Street continue to house its resident and visitor information point situated in the front reception. Visitors to the town and…

Countdown to Hailsham Festival of Arts and Culture

In his weekly message to residents, the Mayor of Hailsham Cllr Paul Holbrook praises youth workers for continuing to ensure that local young people stay safe,…

Julie Coates, manager of the Hailsham Foodbank project, has been recognised as a “Hailsham hero” for her dedication to local community life and passion to help…