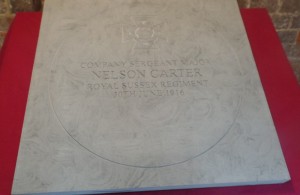 Marking the 100th anniversary of Nelson Carter’s act of gallantry that earned him the prestigious award during the early years of the First World War, a special ceremony will take place at the war memorial in Hailsham High Street mid afternoon on Saturday 2 July, where the commemorative stone will be unveiled to the public.

Past mayors of Hailsham will join the present Town Mayor, local councillors and Royal British Legion members at the event. Everyone is encouraged to attend.