The Parish of Hailsham

The civic parish of Hailsham is approximately 3 miles in breadth and 4 miles from north to south between its extreme points. 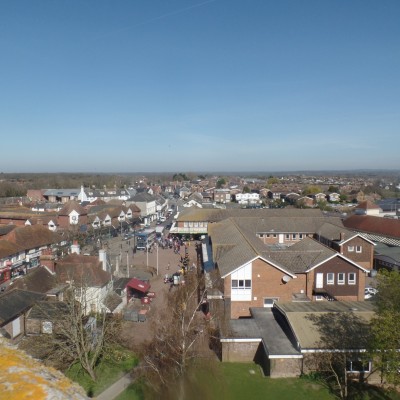 Its boundary (going in a clockwise direction) runs from its most northerly limit, near Carter’s Corner Place, in a southerly direction around Magham Down, over the Herstmonceux road and crosses the low-lying farmlands, passing close to New Bridge and on across Horse Eye Level to Rickney.

It then turns westwards taking an irregular course over the Glynleigh Level, across the Cuckoo Trail (former railway line) to the main Eastbourne road (A22), continuing northwards along this for about three-quarters of a mile until it goes west and north again to take in some of the woodlands around Cacklebury.

It runs on the west side of the A22 in a northerly direction between Hailsham and the River Cuckmere to Hempstead where it turns east to meet the A22. It then runs northwards to the point where the Cuckmere crosses the A22 and follows the river eastwards to Horsebridge and the A271.

On an irregular course eastwards, sometimes following the A271 and sometimes to the north of it, until Amberstone where it completes its delineation by a final straight mile along the line of the road to Carter’s Corner Place.

This includes the areas, which under the Wealden Parishes Order 1991, were transferred to Hailsham being a large area of Hellingly Parish (the residential areas around Anglesey Avenue, Upper Horsebridge, and Lansdowne Drive) along with several smaller areas to the east, south and west (transferred from Arlington, Hellingly, and Pevensey Parishes). A further area of Hellingly Parish (between the A22 and Anglesey Avenue) was transferred to Hailsham under the Wealden Parishes Order 1993.

Less than one per cent of the household waste collected in Wealden ended up in landfill between April – December 2014.

Your feedback is really important to us — please let us know what you think.